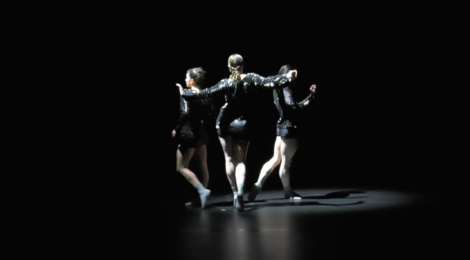 Richard Siegal interviewed by me on behalf of a TV-report about his new production TRIPLE at Schauspiel Köln for WDR / WESTARThttps://www.ardmediathek.de/video/westart/triple-tanzabend-von-richard-siegal/wdr/Y3JpZDovL3dkci5kZS9CZWl0cmFnLWZhNzZlMWM4LTJiNmEtNGIxZC1iNDYxLTdmYTk2NTVhZmMzZg

IS IT IMPORTANT FOR YOU TO FIGURE OUT WICH PEOPLE YOU ARE AROUND WITH?

Yes, sure. Because the art it comes out of the composition of the group.

The people I am around are the artists that I work with most of the time.

For sure there is an infinite number of art works, that can come out of the right group.The chemistry of a group it’s everything.

AND YOU HAVE THE PRIVILEGE TO CHOOSE WHO YOU WORK WITH?

Yes actually that’s a good way to put it. Yes it is a privilege.

It’s a privilege to be able to offer the jobs to people and interesting work which is cultivating them as young talents. It´s inspiring to them. This is absolutely a privilege. In the end it’s an act of curation to be putting together an ensemble.

There is a criteria for why one very talented dancer might be the right person  element for this group, a social element. And another one perhaps who is equally a talent might not, because this is Ballet Of Difference. And that has it’s own frame to it.

SO WHAT ARE THE CRITERIAS FOR CHOOSING THE PEOPLE?

A lot of people in the group are extraordinary dancers and performers. In some way maybe the common denominator is perhaps that they don’t quite fit what is typical for other ballet companies. That they are extraordinary dancers, but for one reason or another they might not find their place in a more conventional company. In a way it’s a kind of band of misfits. But that’s what makes it exciting.

WHY WOUNDNT THEY FIND THEIR PLACE IN A TYPICAL COMPANY?

I don’t know. Prejudices, conventions, body type. Kind of cultural baggage that’s been dragged into ballet from the past, from 19th century, that we are dedicated to divesting ourselves and opening the doors for just fantastic dancers, regardless of  theatre or not they promote some kind of image that has in the past been important.

IS IT A LITTLE BIT AN EXILE FOR OUTCASTS AS WELL?

More like a paradise. At least for time. Often times I think that the profile of dancers who gets attracted to this company, to this situation is maybe the same kind of dancer who might normally want to make their career in freelance. Where they have much more sovereignity over their time, their schedule, the kind of projects that they get involved in and I did that myself.

Perhaps for other reasons they decide that they want do my work. They want to dance with the collections of dancers that we have together, or they want to have a period of coming it from the cold, or wanted to have job security, whatever reasons they might decide to spent some time with us here and then perhaps move on back to another freelance career, whatever fits them.

WHAT KIND OF PEOPLE ARE IN YOUR COMPANY?

There is no real body type, it that’s what you are asking. It’s open. It’s culturally open, it’s physically open, it’s life style open. The only common denominator I would say is that everyone is quiet different from one another.

Yes indeed All are soloists. There is no hierarchy. Nor it’s not a collective. It’s clearly directed. There needs to be that kind of structure to the whole thing, because we have to be efficient and that I really like. No, there is no need for hierarchy.

When we first started the Company Ballet of Difference

it began with the name.  I thought Oh there has to be a company called Ballet of Difference. I’d been choreographing for existing ballet companies and after a few years I had something like a repertoire. That indicated an artistic position, or an attitude vis a vis ballet. I thought, if I had my own company somehow the name would be Ballet of Difference. So we want to have it and started it miraculously low on behold here we are in short order, we made this company. With the support of some very key people and funders.

The project of describing or defining or asking this question, what is difference has been the motor behind the company largely and of course what is ballet as well and how do these things collide and create friction is the fuel for the thing. Initially the idea of difference. I think we are approaching it in peeling it back layer by layer .

Initially I think it was bit placative the way that we are understanding difference, politics of difference we where inspired by trans in politics.

In legislated morality and how we could be using our company to advocate a dismantling of that and a freeing of moral structure in the society and in politics. But little by little I think we’ve kind of exhausted that agenda and now I think there is a kind of a deeper sense of what is difference.

It’s an unending question. It keeps on reflecting on other things. Different approach, different aesthetic. Different music. Different formats. And this maybe attracts a different public as well. The profile of the public is something which is evolving for sure. And I think that’s a reflection of this rest of surge that we have asking that is question , well how else could it be different?

IS IT ABOUT DIVERSITY AS WELL?

For sure, yes! That’s really implicit. My own way of working has and what inspires me what sustains me has been about the learning. And learning through opposition. As a dancer and then later as a choreographer I was always trying to synthesize opposites. And as soon as I felt like I was staring to master something I had to also try something which it what not. And yes this creates a very diverse point of view. Or standpoint artistically and also socially. Because we have to remember like the line between the lives that we are leading and the work that we are doing here is very blurry and is shifting constantly. There is a tremendous overlap. Of course everyone is working hard. But the nature of our work is also that it originates in a passion and a sense of play. That doesn’t have the same kind of purpose driven. It’s not that purpose driven work that you might have in other careers. We identity extremely closely with the work that we do.

Originally what it is, it was a bunch of individuals who just could not stop dancing in their living rooms, in the playgrounds, ballet studios or in the clubs. It wasn’t work that way.

FOR ME ITS NOT JUST DIVERSITY, ITS EVEN QUEER WHAT I LIKE. IS THIS THE PURPOSE, BEEING QUEER AS WELL?

Which includes, which embraces a lot of life styles that are only little by little are becoming accepted by the mainstream. I think it’s in the larger sense that I think it is queer this ballet. What we are doing and I identify myself that way.

BUT IN A NOT LARGER SENSE FOR ME ITS QUEER AS WELL BECAUSE THERE ARE BALLROOM MOVES.

That’s fascinating for me.

IS IT IMPORTANT TO BRING A BLACK DANCER AND A CHINESE DANCER TOGETHER, ON BEHALF OF MIXING DIFFERENT CULTURES?

It’s not if someone is from China or from Venezuela or from wherever they are coming, it’s about their knowledge they bringing into and having some overlap, but also coming in with your own cultural background. And be willing to share it.

The nice thing about it is that it also promotes a certain image of a society which is more in line with the actual society we live in than maybe you might find on stage in other ballets. That I am very proud of as well.